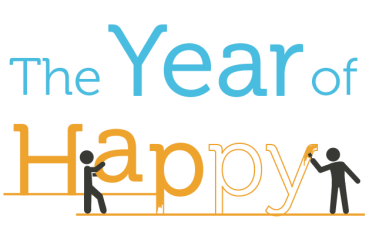 Welcome to week 3 of The Year of Happy‘s month on goals. The Year of Happy is a free online course in the science of happiness. Not signed up yet? Enter your email here and you’ll get a weekly dose of readings and videos to further your happiness education.

“Find a happy person, and you will find a project,” writes Sonja Lyubomirsky in The How of Happiness.

She doesn’t say, “Find a happy person, and you will find achievements.” The benefits of goal setting extend beyond actually reaching your goals, although that’s a nice cherry on top. You’ll start to see benefits from the simple act of creating goals, and from shifting to a growth mindset. Read on to find out what they are.

The benefits of goal setting

In a 15-year study of over 3,500 people, the happiest of the bunch were the ones with clear-cut life goals, who took risks and didn’t give up. They tended to have goals around friendship, love, and helping others.

When we’re focusing on a goal, even our physical health is better. Flow researcher Mihaly Csikszentmihalyi pinged people throughout the day and asked them to report what they were doing and how they felt, and they reported fewer physical symptoms when working on a goal – and more symptoms when alone, on the weekends, and with nothing to do.

Goal setting also has spillover effects into other areas of life. We increase well-being when we make progress toward our goals (unsurprisingly), but we also increase life satisfaction in unrelated areas. That means that going to the gym more often could make us happier in our relationships – not bad as far as side effects go.

Goals are so powerful because they make us feel hopeful and confident. They add a certain sense of structure and meaning to life, and we can happily imagine the achievement of them. Plus – and this might be the reason for the spillover effects – we learn important life skills like planning, time management, and persistence.

In this talk, Oklahoma native Ryan Eller explains how the act of writing down his goals in a bucket list changed his life:

The benefits of having the right goals

In one telling study, researchers asked the graduating class at the University of Rochester what their goals were and labeled some as extrinsic (like wealth and fame) and some as intrinsic (like helping others, learning, and growing).

One or two years later, they followed up with the students to see how they were doing. Students who had set intrinsic goals and were achieving them felt happier and more satisfied with life than they had in college, and less anxious and depressed. But achieving extrinsic goals didn’t have the same effect – those graduates showed no increases in satisfaction, positive affect, or self-esteem, and their anxiety and depression had increased.

When we have intrinsic motivation, we enjoy what we’re doing more. We process information more deeply and become more creative. We persist past difficulties and maintain our interest more. Not all goals are created equal.

The benefits of the growth mindset

The growth mindset, as defined by Carol Dweck, is intimately tied up with goal setting. It’s the best way to think if you want to achieve your goals, and it has many benefits.

For example, people with a growth mindset tend to have lower rates of depression – and to take more action to recover from it than their fixed-mindset peers. Growth-mindset people are also less likely to be shy. But even if they are shy, researchers have observed that their shyness tends to lessen after five minutes in a social interaction.

People with a growth mindset tend to perform better in a variety of domains, not just in the realm of conversation. Growth-mindset students see their grades increase as they enter junior high school, while others’ grades tend to decline. Growth-mindset students taking a college pre-med class do better, bouncing back after an inevitable disappointment on the first test. Growth-mindset participants also do better on management and negotiation tasks in the lab, partly by learning from their mistakes.

What is it about the growth mindset that enables us to perform better? It propels us to take an honest look at our skills and seek out feedback on how to improve them. In one study, Dweck measured the brain-wave activity of people answering questions and getting feedback. The brains of people with a growth mindset lit up when they found out if their answers were right or wrong and when the program explained a wrong answer. But based on brain-wave activity, people with a fixed mindset were uninterested in constructive feedback – they paid attention to whether they were right or wrong and then switched off. In a similar vein, growth-mindset people who have taken a test choose to look at the tests of people who did better, while fixed-mindset people (in an attempt to cheer themselves up) look at the tests of people who did worse – and learn nothing.

The growth mindset also helps us stay interested in the face of challenge, rather than shutting off. From those pre-med chemistry students to 5th graders doing puzzles, it’s the growth-mindset students who get more engaged when things are hard. In this video, chess champion Josh Waitzkin explains how his mindset toward learning led him to the top of the chess and tai chi worlds:

And, of course, that cherry on top is pretty sweet. Setting goals to improve your relationships, health, and career and then achieving them brings a lot of satisfaction – until you set another goal. That’s why the benefits of simply working toward goals are so powerful. Life is a process of improvement and discovery, and goals help us enjoy that journey.

Go back to Week 2: How to achieve your goals

Move on to Week 4: When it’s hard to achieve your goals, try this

2 thoughts on “The benefits of goals”